Wahoo Docks Announces Dock Of The Month For June 2015 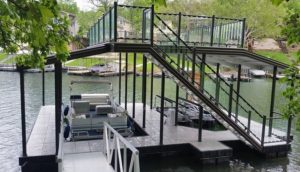 Wahoo Docks, a leading aluminum dock manufacturer in North America, announced today that the Sandman Dock, built by Wahoo Docks dealer Mac’s Cove Docks, was the June 2015 pick for Dock Of The Month. The dock is a double-well version of Wahoo’s strongest and most durable waterproof aluminum dock– the CAT5. The surface is white rock face concrete decking. There is also an upper deck that is finished with the newly available Wahoo Glass Rail from Wahoo Docks’ sister company, Wahoo Decks, allowing for panoramic views of the water. The upper deck shade roof has gables on each end and the finishing touches include a new poly lift, a wet step ladder, and CAT5 bumpers. The dock is trimmed with white powder-coated posts.

The dock was built by Mac’s Cove Docks in Thomas Hill, Missouri. (Named “The Sandman Dock” for the last name of the dock owner.) Jearmy McCubbins, the owner of Mac’s Cove Docks, said, “This was the first dock that we built as a Wahoo Docks dealer. We love the fact that we were able to construct a dock of the highest quality in just four days!”

About The Wahoo Docks CAT5 Dock
The CAT5 features a 9” aluminum mainframe with interlocking connections that dovetail together to provide extra strength. The 9” channel incorporates a feature that supports the decking load without relying on welding for strength. Additionally, welded corners and intermediate receivers provide integral fastening for dock roof poles, which gives the CAT5 extra stiffness without the need for diagonal bracing. There is also a 6″ channel in the lower frame that provides even more bracing for added strength. This ensures dock weight load is equally distributed, further minimizing stress on the weld points and creating a stiff dock structure.

About Wahoo Docks
Headquartered in Gainesville, Georgia, Wahoo is the largest builder of residential boat docks in North America, represented by a network of dealers that embody the most talented dock professionals in the industry. Wahoo sells its residential docks exclusively through this network and manages commercial dock projects from its headquarters in northeast Georgia. Wahoo Docks is recognized for building the highest-quality dock systems available, with an emphasis on strength and durability, aesthetic appeal, and ease of maintenance.